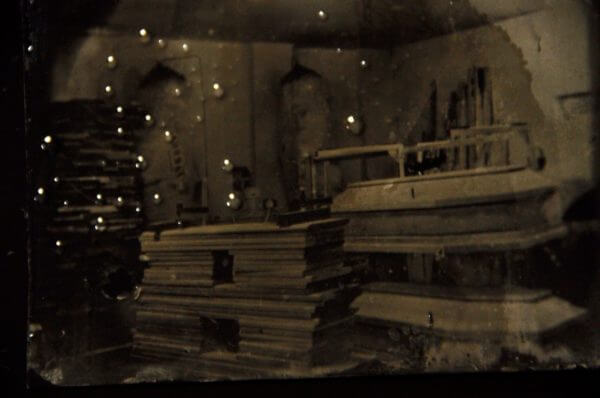 Postpunctum is a project inspired by postmortem photography. Installation consists of images made with ambrotype method invented in 1851 (which is a variation of wet collodion). Project tries to encourage a discourse about depicting death of an individual in contemporary visual culture by showing the process that the body goes through from the moment of death to the burial.
Photographs were taken in a funeral home. Both the bodies and their surroundings were photographed in such a way, in which they can preserve their anonymity. Through this approach the photographs present universal image of death. Using 19th century photographic method allows to blur the boundary between a time and space.
The title of the project is connected to the Roland Barthes' eassey "Camera Lucida". In his work the author analyses a portrait of Lewis Payne taken in 1865 by Alexander Gardner (it is also a collodion photograph). Through his analysis Bathes defines the notion of punctum. This concept was a beginning for my deliberation on photography and its materiality.

Agnieszka Piasecka - born on February 26, 1989 in Gdynia, graduate of photography at Roehampton University in London (2012), graduate of Intermedia's master's studies at the Academy of Fine Arts in Gdańsk (2016) in the studio of prof. Grzegorz Klaman. He deals with alternative and historical photographic and video methods.

Together with Justyna Orłowska, she runs the Turn to Culture initiative where, through photographic and video documentation, she enables the dissemination of artistic and cultural events.