Winner of the third place in the Vintage Grand Prix 2019 competition. 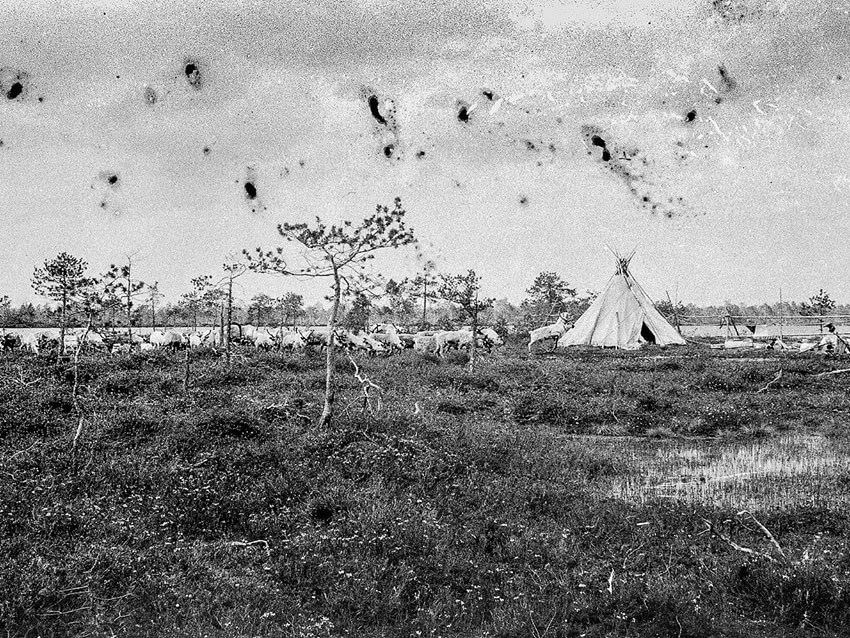 Shot on a 35 mm film and developed using liquid containing oil from oil spills at KhMAO. The oil creates irregular damages in the gelatinous “flesh” of a photographic film, deforming it with holes and scratches just as the natural environment is deformed as a result of the oil spill.

Near Surgut (Siberia), Russia in Russkinskaya village, lives Antonina Tevlina from Khanty people. Her mother and father still lead an indigenous way of life. These nomadic people and the grazing reindeers at their ancestral territory of about 600 hectares face a new problem: oil producers came to their land.

Oil spills, pollution of water and lakes, destruction of the ecosystem - all of these lead to a decline in reindeer population.

"Yagel moss is like bread for a deer, if something happens it takes around 30 years to regenerate" - says Antonina Tevlina.

In addition to pollution associated with oil production, the oil companies set up checkpoints on all roads leading to the oil wells. Now only close relatives placed on the lists can get into the territory of the ancestral lands, while some guests of the family have to dress up in Khanty peoples’ traditional clothing in case they pass through a checkpoint on their way.

About 50% of oil in Russia is produced in KhMAO, and extraction areas often coincide with the places of residence of Indigenous Peoples.

About 1.5 million tons of oil are poured out annually into the natural environment in Russia - this figure is approximately twice the volume of the 2010s spill in the Gulf of Mexico.

Igor Tereshkov is a 29-year-old Moscow based photographer, born in Energodar (USSR, Ukraine). He is working in documentary and post-documentary photography mediums, experimenting with alternative photo process, cyanotopes and self-made alternative film developing. Also he is researching themes of ecology, environment and indigenous people. He studied documentary photography and photojournalism at the School of Modern Photography Docdocdoc in Saint-Petersburg, since 2018 he is studying on course "Experiences of Contemporary Photography".