Two cycles have been put together: About her, the series that Gierzyńska began in 1979 and the series Black, White and Green, started in 1984; both cycles have continued to this day. 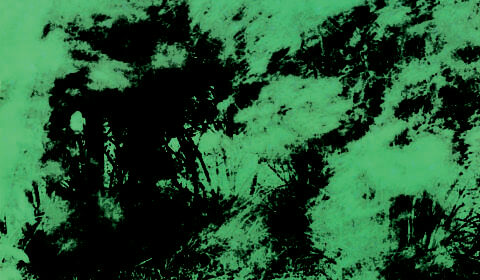 The dominant feature of these two cycles is the mood, at least that was the artist's intention - to photographically describe the moods we perceive when looking at the cyclically changing landscape: euphoria, anxiety, expectations, ecstasy, depression, because we are a small part of great and powerful nature.

The technique of taking all the photos was simple: black and white negative and Gierzyńska's personal work in the darkroom, next to the enlarger, and after developing the bromine even more - with dyes, pencils, stamps. Sometimes with scissors. For her own needs, the artist broke with the universal "noble" attitude towards the photographic print. Rather, it was a piece of exposed paper for further (often brutal) processing. Gierzyńska also did not see (as a graduate of the Academy of Fine Arts) the sense of producing inputs and calculating prints.

In principle, each enlargement is unique; even when there were 2-3 enlargements of the same motif, as a result of interference (sometimes still at the stage of taking the picture) they were significantly different from each other.

The introduction of color to exposed black and white enlargements was an attempt to get used to the color in photography; Contrary to appearances, this is not a simple matter. By the way, the desired effect was obtained - it added mystery and anxiety in the frames of the forest or field.